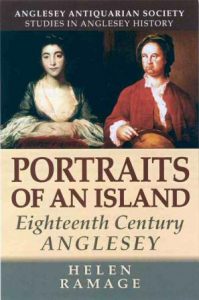 The Eighteenth Century was an articulate age, and this book is not a narrative history but an attempt to picture life on the island mainly through letters, diaries and documents.

It begins with quotations from travellers who ventured to cross the Straits, and with accounts from the intrepid islanders themselves who travelled along the deplorable roads to Anglesey to destinations outside the island – a few even went on the Grand Tour; more often they voyaged to Dublin, the island’s unofficial metropolis.

The cottages of the poor and the mansions of the rich, with their walled gardens and serpentine walks; the pleasures of a laden table and the eating of traditional peasant food are described. Recreations such as hunting, cock fighting and the merrymaking patronal festivals contrast with the harsh punishments meted out to wrongdoers. Illnesses and epidemics, with the accompanying medical remedies – often horrendous – and the high mortality rate, as recorded in letters and documents makes sad reading. The schooling of both boys and girls, the growing religious divisions and the improvements in farming during the century are portrayed by the inhabitants themselves.

The author was educated at the Caernarfon County School and the University College of North Wales, Bangor, where she completed research in Welsh History on London Welshmen and the Honourable Society of Cymmrodorion. She was an extramural lecturer for many years and made a number of television and radio broadcasts

This volume, the tenth to be published by the Anglesey Antiquarian Society in its series Studies in Anglesey History, consists of 294 pages, including 16 pages of colour illustrations and a detailed and updated bibliography. ISBN 0-9500199-8-4

The first edition was published in 1987.