Vol 13: A Prism for his times: Late-Tudor Anglesey & Hugh Hughes of Plas Coch 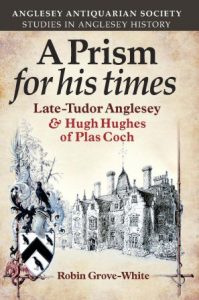 Sixteenth-Century Anglesey – isolated, yet surprisingly connected. Through Henry VIII’s acts of union of 1536 and 1543, the island, like the rest of Wales, was becoming folded into the new emergent entity of ‘Britain’. Yet its people remained resolutely Welsh, with their own culture and language.

Through the life and career of Hugh Hughes of Plas Coch, a previously-unknown Anglesey landowner-lawyer, fresh light is thrown on the island’s evolution and governance across the late-Tudor period, a time of turbulence and opportunity – of the first Welsh-language Bible, the Spanish Armada and William Shakespeare.

This study uses one man’s life to reconsider some settled assumptions, with echoes for present-day discussions of Welsh identity.

“This wonderfully-researched case study of Hugh Hughes shows how one educated uchelwr took advantage of changing opportunities for Welshmen, to emerge as a major figure in sixteenth-century Anglesey and beyond. Hughes’s life and career, as presented here, makes an important contribution to Anglesey’s history, as well as to wider understandings of sixteenth-century Wales and its incorporation within the Tudor state”
(Dr Shaun Evans Director, Institute for the Study of Welsh Estates, Bangor University)

Robin Grove-White was raised on Anglesey and lives at Llanfechell in the north-west of the island. Long ago he was a comedy-scriptwriter of TV, including BBC’s That Was The Week That Was, but now he is Professor Emeritus of Environment and Society at Lancaster University and chair of the Institute for the Study of Welsh Estates at Bangor University. At earlier stages he was full-time Director of the Council for the Protection of Rural England, and chair of Greenpeace UK.

Professor Grove-White has a PhD in Welsh History and has published widely. He is the Anglesey Antiquarian Society’s current vice-chairman.